Von Welt: Streaming to the World… 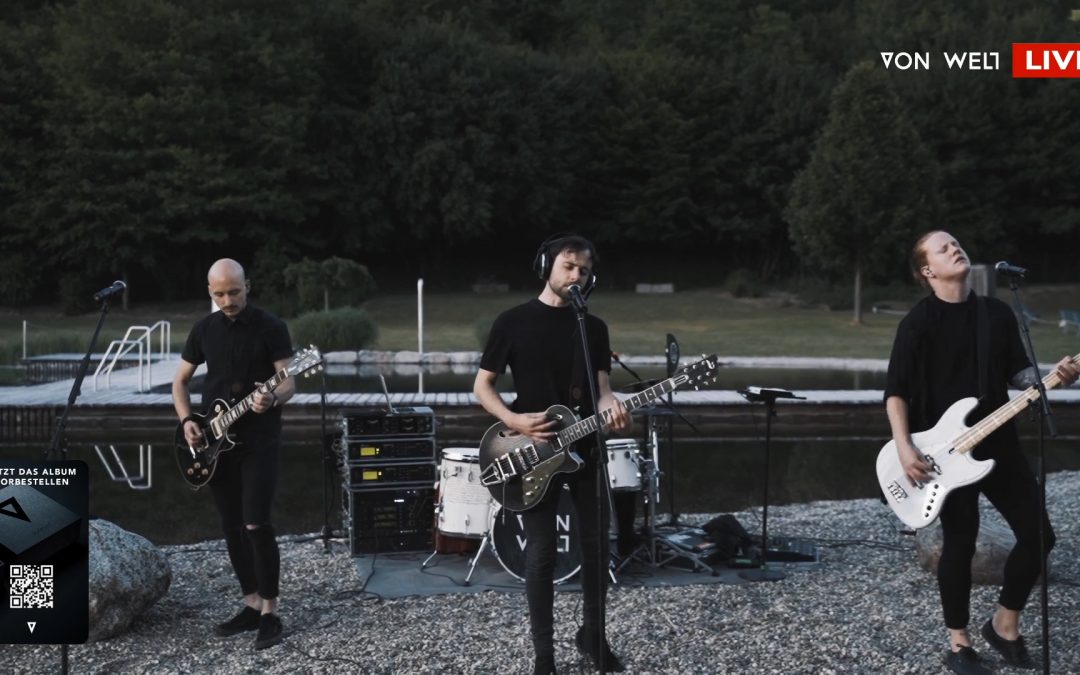 The approach to their music taken by German alternative rockers Von Welt is so far removed from the average DIY band, that if you saw and heard them, you’d be forgiven for thinking that someone had used the term by mistake. Everything about their song-writing, performance, presentation, audio and visuals, shares the values of a signed act with significant label backing. But DIY is exactly what they are, and they’re more than comfortable with the tag.

Their next album is set to enter the Top 100 in the German album charts and even a cursory look and listen to their YouTube output reveals a highly-tuned outfit with some great material. Von Welt spent eighteen months writing in the studio before stepping out in public and it is this formative period, during which they explored every technological and musical avenue open to them, that underpins their development. As studio nerds to a man, they integrated technology into their work from the word go, using a software-based live system that supported their love of plugins. The bands trusted engineer Moritz has built a DiGiGrid/SoundGrid Waves system that meets all their needs…

When the Coronavirus pandemic halted any chance of playing the club and festival gigs that Von Welt had in the diary, the band didn’t spend much time scratching their heads wondering what to do. Having successfully completed a series of  ‘silent’ street shows in German cities before lockdown  – the audience all wore headphones – the band decided to adapt that model and perform some full-on live stream concerts to stay in touch with their fans. 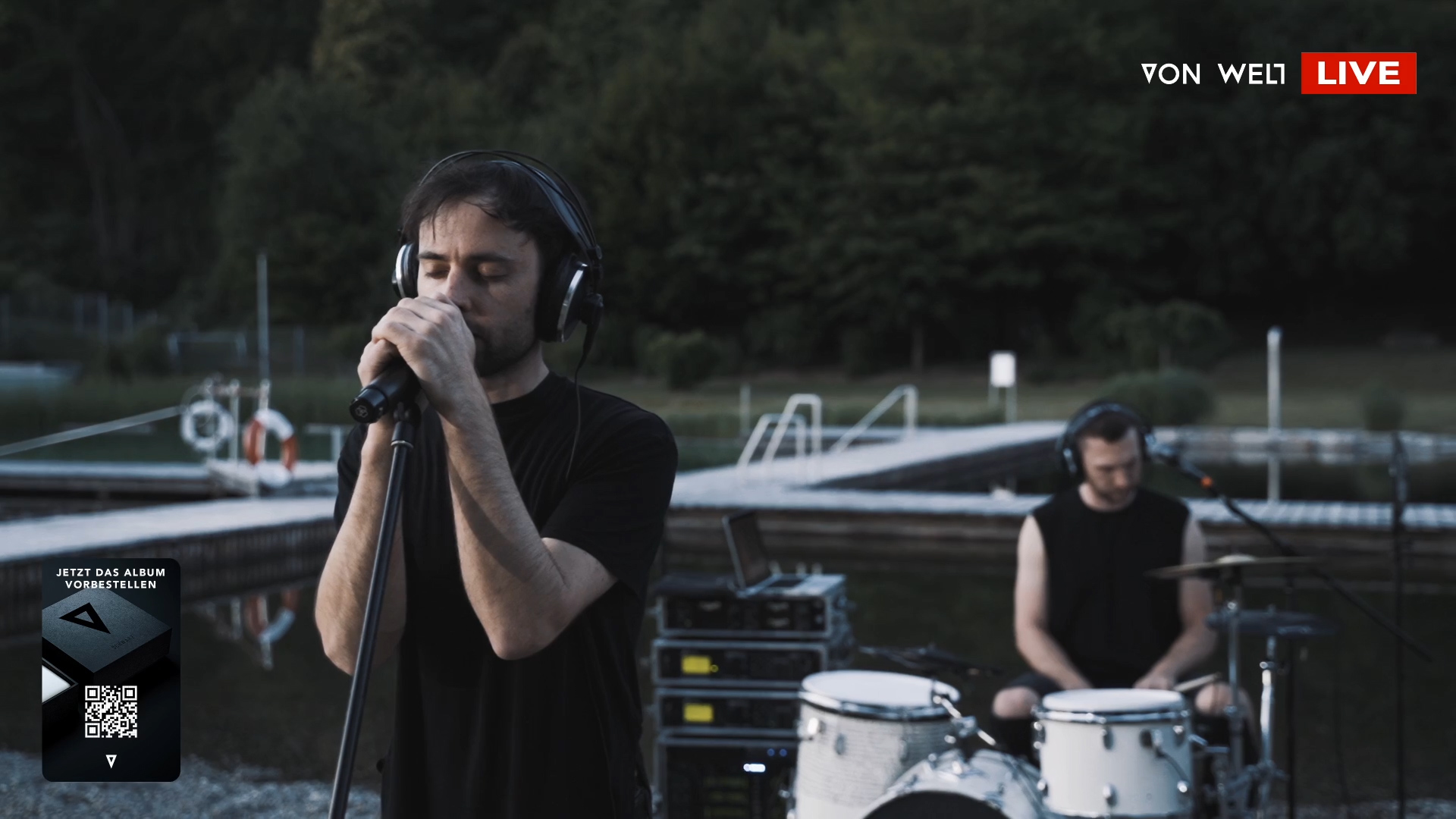 “The silent gigs had demonstrated to us that we had all the means necessary to stage a high quality livestream. In order for it to really work we knew we had to differentiate ourselves from the regular Instagram type of thing by placing the emphasis of high value video and audio. We didn’t want to do the gig just to ‘be there’ we wanted to make it as close to a real gig experience as we could get. Our DiGiGrid system is the motor and brains behind our band technology and it made it possible for us to achieve vastly superior audio to many similar ventures.”

The four members of the band and just two crew set up in an abandoned paper mill deep in the Black Forest. Von Welt is a slick, well co-ordinated operation, so the shoot was meticulously planned in order that the project adhered to strict social distancing rules. Nico reflects on that aspect of proceedings by saying that:

“We were very careful. We all wore mouth and nose coverings, disinfected the gear and observed the distance rules. In a way our ethos for the gig was very much about providing a good show for all the people who were at home respecting those selfsame rules, so we took it very seriously. It was important to us to show that we were united with our audience in that respect.”

Previous successful experience of the silent concerts meant that the band were confident and relaxed about their performance. The atmosphere of the location played its part as did the technology in which they have placed their trust – no need for a truck full of gear, just back line, their DiGiGrid set up and headphones. Nico continues:

“We don’t use a conventional hardware mixer – instead we have adopted the unique DiGiGrid system because of its flexibility and compactness. The system is built on a rack height of 3U and is more compact than any other system, with 20 inputs and 14 outputs, which we all use. It’s expandable, so if we want to add more units we can do so via a CAT cable. We use the new DiGiGrid IOS XL and an IOX for all our concerts, whether that’s a club gig, a festival slot, a headphones ‘silent’ gig, or as was the case here, a streaming concert.

“The special feature of the livestream was that two computers are connected in the SoundGrid network. One is the band computer on which the Logic session and the digital mixer are running. This is next to the drummer so he can easily start a new song and control the show. The other one is the main computer through which the livestream is streamed, which is located in ‘front of house’ and is connected to the system via a long CAT cable. We simply send the main L/R signal to the FOH computer, then to the broadcast software and from there it’s synchronised to the video signal and sent to YouTube.”

After the first gig, which was watched live by over a thousand people (with more watching afterwards on their YouTube channel) Von Welt repeated the experience, boosting and tweaking a few elements that they had felt could be improved upon. They grew the audience across both gigs and look back with great satisfaction on the project. 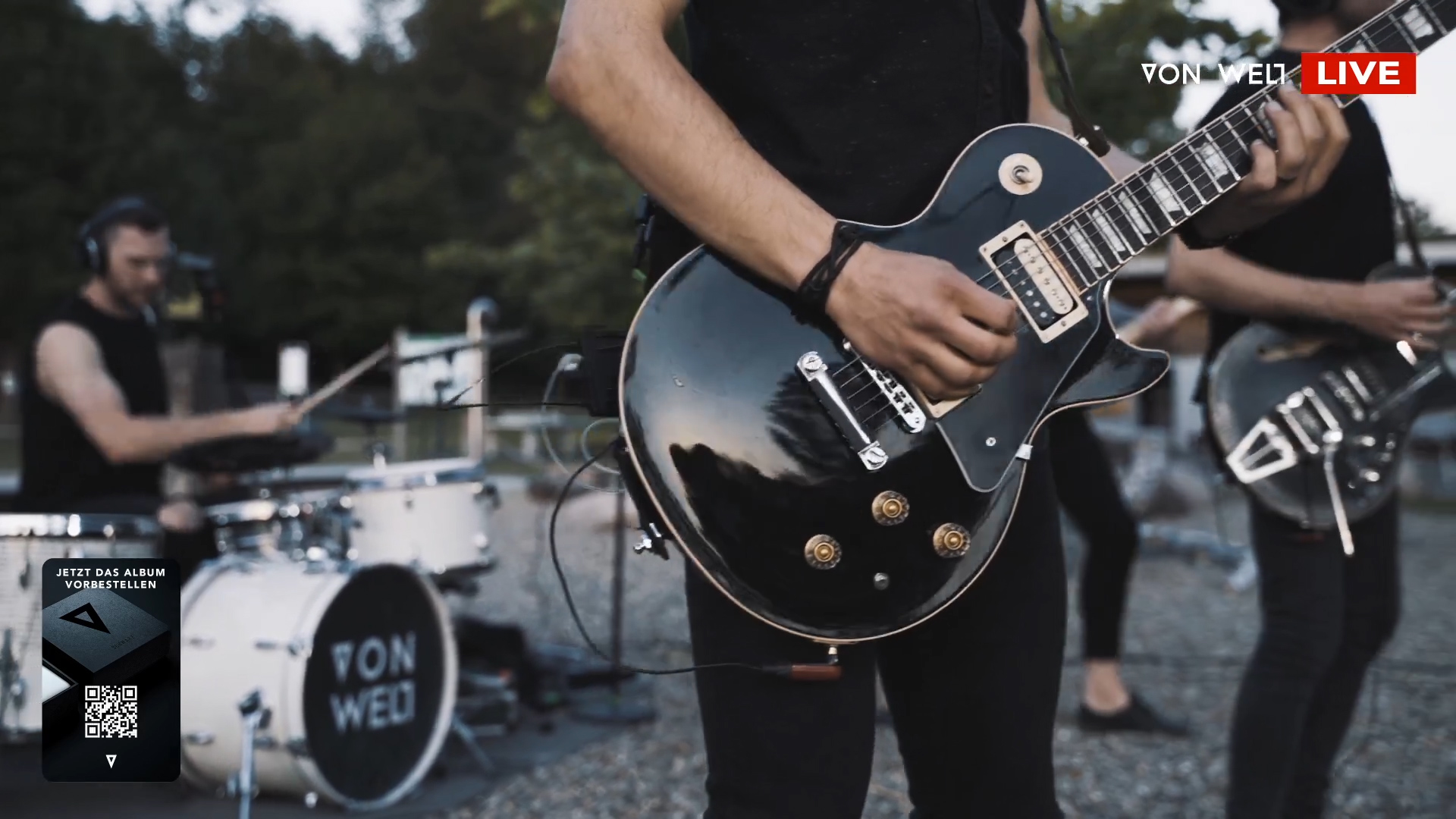 “During the shows we felt great and had the best sound we ask for. The silent gigs we’d done definitely helped in that respect and so did having Moritz there, who’s a very calm influence! Even when we return to full on, proper gigging, we’d definitely consider doing some more streams like this – after all, we can be playing in Germany, the UK and the US at the same time!”

Von Welt’s new album ‘Schwarz’ will be released in July and they have produced a limited edition fan boxset to accompany it. Sell all those and the Top 50 beckons for this innovative and energetic band, whose sights are always set on the next level. Given their repertoire, their attention to detail and mastery of the application of cutting edge technology, who’d bet against their star continuing to rise?