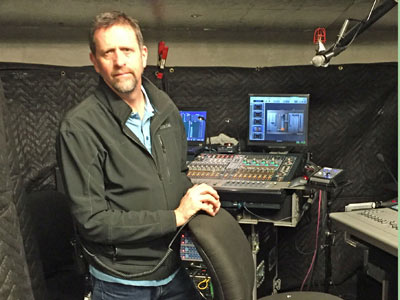 California-based firm Pro Media/UltraSound, which integrates audio/video and performance audio systems of all sizes and scopes (credits include Dave Matthews Band, Grateful Dead, and The Three Tenors, to name a few) has chosen DiGiGrid IOS for the 2015 NHL Stadium Series game held at Levi’s Stadium in Santa Clara, California, earlier this year.

Derek Featherstone, VP Tour & Rental at Pro Media/UltraSound, notes, “Pro Media/UltraSound has been very involved with the early development of Smaart optimization software. On large projects, it is efficient to deploy multiple microphones during the optimization process. We are using DiGiGrid IOS and the Waves eMotion ST mixer to take in and calibrate six wireless measurement microphones at one time. The fact that DiGiGrid IOS has great-sounding mic preamps that add no coloration, along with supporting ASIO transport of the test signals, makes for a state-of-the-art system that we can trust when making critical electro-acoustic measurements. The final optimization of any sound system involves listening. We use DiGiGrid IOS and the Waves eMotion ST mixer to route playback material to the sound system. We are able to use various Waves plugins to both monitor and affect playback material in order to better understand the acoustic environment. This information is then used by the engineer when doing the final mix, by using similar plugins and techniques on the live program to create a unique soundscape.”

Ted Leamy, Pro Media/UltraSound Chief Operating Officer, adds, “We were both looking for a flexible system — one we could easily integrate with modern front-of-house rigs as well as with existing systems. This includes our work refitting sports facilities’ PA control rooms. DiGiGrid IOS meets all of our requirements and is also cost-effective.”