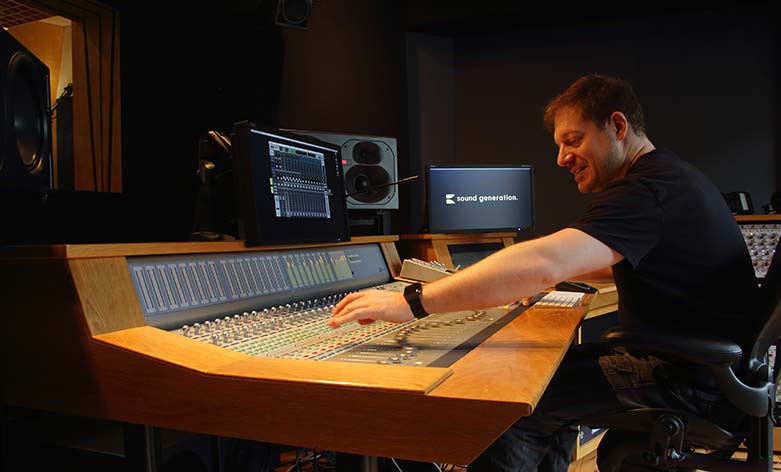 n amongst the hustle and bustle of Manhattan’s West Village sits Sound Generation, a state-of-the-art recording and mixing studio that plays host to engineers and producers from around the world. Its latest investment is in DiGiGrid technology, which maximizes the studio’s networking flexibility.

Sound Generation splits its time between music and postproduction sessions, so having its workflow switch quickly and smoothly is crucial. DiGiGrid is a perfect solution for the studio, which comprises control room, vocal booth and a larger live room.

A DiGiGrid IOC sits in the control room, managing a diverse range of duties, depending on the needs of each session, including I/O for talk and listen back mics, headphone outputs, and SLS and Cue feeds to the live rooms. It is also used as a multi-channel input interface for the Blu-ray player and its AES I/O is used to hook up all the studio’s vintage time-based effects, that max out at 48k sample rates.

“What initially drew me to DiGiGrid was the overall flexibility and the quality of the software and Core Audio/ASIO drivers,” says Andrew Mittelman, Sound Generation’s owner and engineer. “With my new studio update, I wanted to be able to offer the exact same I/O setup to all my clients, who are increasingly interested in using other DAWs besides Pro Tools.

“Since every digital I/O on the IOC has sample rate conversion, we can keep all our master Pro Tools sessions at 96k, but still utilize all the cool vintage effects boxes. And since all the hardware effect insert send/returns are patched into the SoundGrid network, any engineer can inject those effects into a headphone mix without taxing the DAW.”

In the machine room, Sound Generation has a DiGiGrid DLI, two DiGiGrid MGOs and a Waves SoundGrid Server One, the DLI providing 64 DigiLink paths to/from the studio’s HDX3 Pro Tools system, allowing each user to utilize these paths in two different ways: for Waves SoundGrid DSP voices; or for SoundGrid networkable I/O patch points. 32 DL paths are dedicated to Waves SG DSP voices, providing low-latency Waves DSP directly from Pro Tools. The other 32 DL paths are used as networkable I/O for other computers or I/O devices on the SoundGrid network.

“Up to 64 Waves SoundGrid DSP Voices are available, so it is easy to toggle the other 32 DL paths in the SoundGrid Studio app to being used for DSP,” continues Andrew. “The remaining DigiLink ports on the Pro Tools rig are connected directly to two DAD AX-32 Routers, so any type of I/O can be patched in or out of Pro Tools.”

“There are many occasions when my clients come in with their own laptops with multitrack sessions already created. Before I installed DiGiGrid, I spent a lot of time consolidating, bouncing and then importing audio files into Pro Tools. Now I can just hand my clients an Ethernet cable and get up to 128 outputs from their computer feeding directly into my Pro Tools rig,” says Andrew. “Since the SoundGrid network supports an audio MIDI setup to sync two computers’ DAW transports, I can choose to monitor the tracks live until my client is ready to commit, and then I can do a one-time record pass into Pro Tools right on the grid.

“The DiGiGrid interfaces also allow me to easily turn the vocal booth into another control room, so my clients can have a mix session going on in the main control room, and a separate tracking session taking place in the live room. In addition to the IOC, DLI and two MGOs that I keep connected to the main control room, I also have an IOS that isn’t installed in any specific room. I can give the IOS to another engineer/producer to use as a completely separate I/O plus DSP rig when the control room is busy with a mixing session.

“And I can even take it out on live recording/mixing dates and use it in conjunction with the Waves LV1 software mixer and tracks live. The whole set up provides me with an unparalleled level of flexibility.”