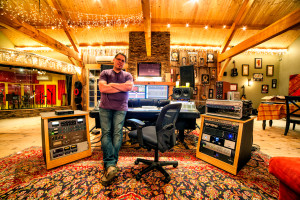 DiGiGrid DLS (a collaboration between Waves Audio and DiGiCo) is an all-in-one processing and networking hub that bridges Pro Tools and the Waves SoundGrid® system. With its built-in SoundGrid DSP server, network switch, and two DigiLink ports providing as many as 64 digital inputs and outputs, DiGiGrid DLS gives users more processing power and lets them take full advantage of their existing Pro Tools system. By providing full plugin integration inside users’ DAWs, DiGiGrid DLS lets users track, monitor and mix while running hundreds of SoundGrid-compatible Waves and third-party plugins in real time—all with an incredibly low latency of only 0.8 milliseconds.

From his home base in Franklin, Tennessee, just south of Nashville, Joe West has this to say about the benefits of using DiGiGrid DLS: “The fact that I am able to track as many musicians as I want in my barn, all at the same time, all locked together in one pocket – and on top of that, sounding like a finished record with hundreds of plugins running in real time – is absolutely priceless. If this were the only thing the DLS did, I’d have to have it! But I also love the fact that it transitions effortlessly from my studio Pro Tools HDX system to my portable rig, where it serves as my playback engine. I also love the connectivity that it brings to my creative world. Anyone with an Ethernet connection can join in and have a digital portal into my sessions while writing, recording or mixing! The possibilities are limitless.”

West adds, “I am especially impressed with the DLS’s speed. It has super-low latency, which allows me to capture inspired moments. We all perform better when we are moved emotionally by what we are hearing. The DLS allows me to process audio with plugins in real time, helping stimulate and capture magic moments that would otherwise be anemic. And from a workflow perspective, the DLS enables me to template entire plugin chains with just one click!”