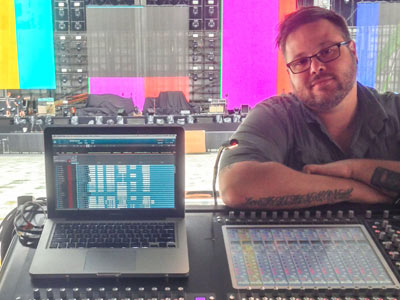 Compact and portable, the DiGiGrid MGB interface lets you plug any coaxial MADI-enabled device into the power of the Waves SoundGrid® networking and processing platform. Record, process and playback up to 128 audio channels, using literally hundreds of Waves and third-party plugins, with super-low latency, clocking in at only 0.8 milliseconds! You can even set up to conveniently record your next show, using only your laptop.

About his setup, Zito notes, “Our entire audio control is 100% digital. We use DiGiCo SD10 consoles, and we share stage racks between monitors and FOH. As a result, we have no analog splitters in our system, nor did we want to add any just for recording. We turned to the DiGiGrid MGB interface as our solution. Redundancy was obviously a priority, so we used one DiGiGrid MGB at FOH and another for monitors. We also wanted DAW redundancy: since the Waves SoundGrid technology allows us to connect multiple computers to the same network, this was super-easy.”

Zito continues, “At FOH, our primary recording computer was running Waves Tracks Live. For monitors, we did something slightly different. Because the goal for this show was a future live release, capturing this specific performance was very important. So we used the DiGiGrid MGB located at monitors, but ran 250 feet of Cat 6 cable to a room backstage, which enabled a dedicated engineer to monitor the live recordings and solo the audio channels to ensure a clean recording. To achieve this, we had one machine running Waves Tracks Live solely for the mixer function, to monitor and solo channels, while a second laptop ran Tracks Live as backup, and a third machine was running Reaper. All in all, we had two DiGiGrid MGBs and five computers recording!  We ended up recording almost a hundred tracks of audio at 48K. In the end, all systems performed flawlessly and all five machines tracked the entire two-hour show with no issues whatsoever.”