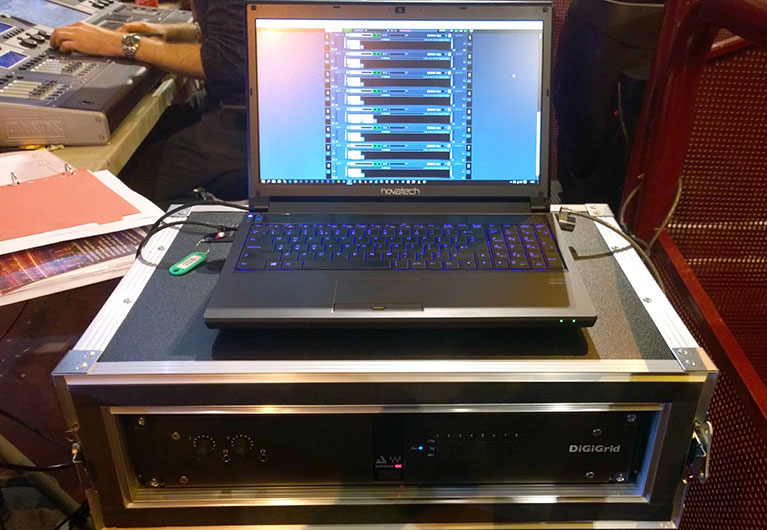 Always on the look out for interesting stories, DiGiGrid caught up with Phil from Phil Wright Sound to see what he was up to with his DiGiGrid interfaces.

Phil has spent more that 20 years working in the live sound industry, providing services from mixing, through to system design, post production and project management. With a career that started in Theatre, he progressed through the Guildhall School of Music and Drama, and then Sound by Design where he mixed many of the largest classical gigs, becoming one of the most experienced engineers to work the Royal Albert Hall in London.

Since turning freelance a few years back, Phil has been building an inventory of his favourite tools, and the DiGiGrid IOS has become an essential part of his kit.

At the time, Phil was looking for a SoundGrid Server to support his use of Waves plugins in live applications. Instead of investing in a standalone server unit, Phil opted for the IOS; an integrated interface that incorporates high quality analogue I/O with a SoundGrid Server and a 4 port network switch.

Phil explained to us his reasons for his choice “I have always found DiGiCo consoles to be the best, and the DiGiGrid system was the logical extension. I started with an MGB and it grew from there.

“I use it mainly as a server for live shows, supporting artistes I look after in a range of non-touring situations where we have different house consoles every day. It’s really useful to one day connect to a waves/SoundGrid enabled device, the next day via a MADI port using my MGB and then sometimes via the analogue IO on the IOS when using older digital or even analogue consoles. With IOS I can keep my FX handy regardless of the mixing platform.”

So what is it about the IOS that Phil likes so much? “I like the fact the IOS is silent, which means that I don’t have to hide it during classical music / theatre shows. I also like how much grunt it has. I’ve not yet run it out of processing. And it goes without saying that it sounds awesome”

By building the IOS into his standard packages, Phil is able to quickly deploy his favourite reverbs and compressors, giving him much better consistency for artists when he’s not touring a console or control package.

Phil sums it up “With my IOS, and my Waves package on a show, I can quickly and easily access the creative tools that help me do my job.”