Danish Rock Gets the Power of DiGiGrid’s MGB 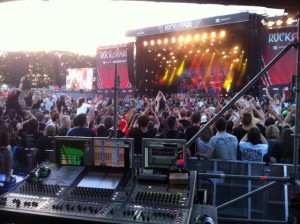 The compact, portable DiGiGrid MGB interface lets you plug any coaxial MADI-enabled device into the power of the Waves SoundGrid networking and processing platform and it is fast finding favor with audio engineers around the world; from those that come across it by chance and recognize its huge potential, to those who go in search of a solution for a specific demand. Mads Mikkelsen, Front of House engineer for Danish rock band Volbeat, is in the latter camp…

“I always try to stay up to date with any new and exciting stuff the manufacturers I use, develop,” says Mads. “But this time I was actually looking for a solution just like this.”

“For a couple of years I have been running all my Waves plugins with the integrated MultiRack SoundGrid on a DiGiCo console, accompanied by a SoundGrid Server One on my desk, plus a MultiRack Native set up for more Waves processing on the side. But I wanted to be able to process more Waves plugins on a standalone device to give me more control and overview, so I was very happy to be able to get the MGB, plus a Server One, for our last arena tour with Volbeat.”

Mads was never in any doubt that the MGB was the right solution for him.

“Being a Waves artist, and having toured exclusively with DiGiCo desks for the last six years, this product looked like it was custom made for what I need every day when I mix Volbeat’s shows,” he says.

“I was running Waves on a MultiRack Native rack, so I had a control computer (in my case a Mac mini I7 SSD with 16 GB of RAM), so I had to get a SoundGrid server as the audio number cruncher,” explains Mads. “I chose the Server One – which is the server they offer with the lowest latency – and most important, I had to upgrade my Native licenses to SoundGrid licenses. This means there is a cost associated, but we are talking pro audio for big rock shows, so I would be very worried if there was no cost. I like it when quality and price go hand-in-hand. It makes me feel more comfortable with the product.”

Mads concludes, “The MGB / SoundGrid Server One combination is very reliable: it gives you all the tools you could ever wish for; it lets you customize your workflow in every possible way; and the pure sound quality of Waves and DiGiCo goes without saying.”