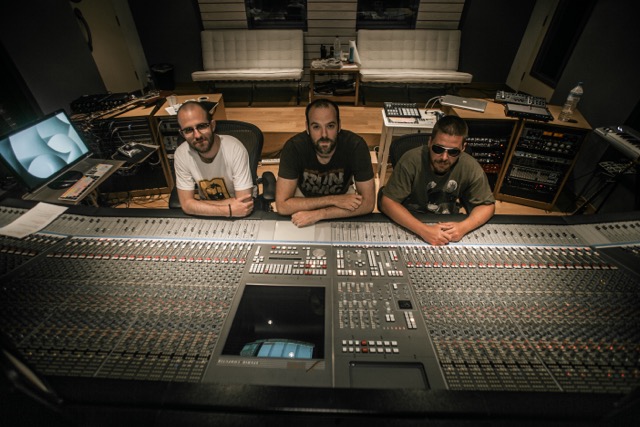 Ten years ago, Berlin-based producer Marek Pompetzki met a rather disgruntled Paul NZA, who wasn’t quite happy with a hip-hop track he had been working on. Pompetzki mixed the project for NZA, and the two of them spent the next two weeks “cranking out a couple of beats.” The result? The beginning of something quite magical. The talented twosome are now among the most reputable producers in Germany, and their team has been responsible for a series of No. 1 singles and albums. They have won countless awards and were nominated in the Best Producer category of the 2009 ECHO Awards, the German equivalent of the GRAMMYs. In 2010 they were joined by Cecil Remmler, who had just finished studying film scoring and electronic music production at Berklee. Today, business is better than ever—the team currently has the No. 1 single in Germany and Switzerland—and thanks to a newly acquired DiGiGrid IOX and DLS system, workflow has been transformed.

Pompetzki, 37, says his musical journey really began when he was four years old and his parents bought him a piano. Although he admits he was frustrated that he couldn’t play like Elton John right away, he already knew that music was going to be his career path. After learning the ropes in the early years, in 2005 he met Paul NZA, and things started to get really interesting.

“Paul was having issues with a hip-hop project he was working on, so I got involved, and things started to click,” he recalls. “We realized we had something good going; I think we had about twenty tracks which all got cut, so we knew that we were productive together! We haven’t gotten around to thinking of producer names, so we go by our real names—which makes us very unrecognizable, but at the same time makes it possible for us to do a lot of different styles of music without being pigeonholed.”

So many advancements have occurred in audio production during Pompetzki’s more than twenty years in the industry. Like any producer, he would upgrade, upgrade some more, and collect more and more kit. As a Pro Tools HDX and Logic user, he was recently introduced to DiGiGrid IOX—and it has transformed the workflow at his own Numarek Studios.

“At first, my attitude was very much, ‘What would I need DiGiGrid at all for?’ Like a lot of people, I didn’t understand what it was capable of or what it was really doing. I had my laptop set up, I had Pro Tools HDX set up in the main room with all Avid interfaces, and I was super-happy with it. I also thought, ‘Here we go, another box that I don’t want to carry around with me.’ But then I got to see the IOX, and what astounded me immediately were its unbelievable networking capabilities. First of all, with IOX and DLS, we now have a way to interface 64 channels of networked audio into the Pro Tools HD engine, which was just not possible before with anything. Previously, I’d be doing some unbelievably annoying and complicated routing just to interface applications on one machine. With IOX, I can have Pro Tools and Logic on one Mac Pro and route 64 channels back and forth simultaneously—or I can route Spotify, or whatever else, into Pro Tools. At the same time, I can just hook up the IOX via an Ethernet cable and use it as an interface box for the big set up, or my guys might use it as an audio interface on a laptop while I’m mixing, and I can always listen in from my studio to what they’re doing, and they can listen in to what I’m doing. The flexibility is truly amazing.”

DiGiGrid IOX is also multi-functional at Numarek. It’s not just a mobile interface for the laptop—far from it.

“I did a string session at an artist’s house recently,” Pompetzki says, “just off my laptop and with the IOX.I put the IOX right next to the musicians, connected a bunch of microphones, and was able to remote control all the preamps, which sound absolutely amazing, by the way. Not having to walk up to the box anymore—as you have four headphone mixes for the musicians—is just fantastic. You have twelve analog inputs, you can remote control everything from Pro Tools, and you even have a second system as a backup, and you can track with that as well. There isn’t another box out there that has that so many preamps that are networkable. Being able to connect via one Ethernet cable is also fantastic. But this is only the boring way of using IOX!”

What’s the cool way, then?!

Pompetzki laughs: “Well, the really cool way that I use IOX on a daily basis is to extend my inputs from the big Pro Tools system. So if I want to track something in a room where I don’t have multicores, I just hook up the IOX with a network cable, and ‘bang’—I have another twelve preamps with headphone mixes wherever I want them to be. That is great. I know a lot of my colleagues who work in the live environment are also very excited that they can just put a couple of those IOX interfaces next to the stage and then use a touchscreen computer to run the whole show. That’s another great way to use IOX.”

Discussion turns once more to the headphone amps and how having four separate mixes is a complete godsend:

“I don’t know of any box that has four headphone outputs with different assignable mixes,” Pompetzki states. “Some boxes might have two outputs, but they usually carry the same signal; or if you’re really lucky, you might have two separate mixes… but four? That’s extremely helpful. Plus, you can actually hook up another four headphone amps to the back, and have eight dedicated mixes if you want.”

In addition to the IOX, Pompetzki also uses DiGiGrid DLS “basically on everything,” but especially to access his Pro Tools HDX mixing engine:

“DLS gives you a gateway to the whole networking world. I have HDX2, so on one card I have 64 analog Avid I/Os connected to my outboard, and on the second card I have 64 digital I/Os into the DLS. Basically, this now makes it possible to use IOX boxes and route them back into the HDX engine, but I can also use Logic or Spotify on the same machine; or if someone comes in with a laptop running Ableton Live, you just install the SoundGrid driver, and you’re able to route the signal into the big Pro Tools system, which wasn’t possible before.

“The other thing it does, thanks to the built-in SoundGrid DSP server, is run Waves plugins. What’s really nice is that you can save your plugin chains; you can then use them on the HDX system with the DLS, or on your native laptop inside any DAW. So I might have a recording channel strip that I like to use, and then, when I am on the road, I can just copy that same channel setting and keep recording with no latency. If you have SoundGrid around, you essentially have a very similar thing to HDX tracking. It’s extremely efficient, and very versatile.”

Pompetzki admits that because he uses extremely quick machines, he does not really need the extra plugin power. He does, however, find elements of it very useful:

“I use one bit of the DLS for the I/Os into Pro Tools, and then the integrated SoundGrid server on the laptop to process the plugins , which is where you really need the power,” he explains. “So you can split the duties between the I/O on the HDX system, and the DSP over the network, to another machine it’s connected to. That is very useful.”

Pompetzki insists that DiGiGrid is “hands down, better” than any of the other network protocols that he has had the opportunity to  work with, and that the extremely low latency is another big bonus.

In the future, Pompetzki sees further musical doors opening thanks to the IOX:

“I want to take my IOX to band rehearsals, because even if the room isn’t sounding great, sometimes you get inspired first takes, and you wouldn’t want to live without those, would you?” he smiles. “So if you just take your IOX with you—which is much smaller than a whole rack of dedicated recording gear—you can see if anything comes up that could be used in the production later on. Furthermore, imagine I’m in my main room mixing, and the guys are doing beats in the B room on a laptop setup. They can have the IOX connected to their computer, just as an audio interface. I am using the HDX system, but I can then route my HDX output to one of their headphone outs, and they can route their output to one of my Pro Tools channels, so I can always listen in to what they’re doing. Or they can step over and hit play on their machine and listen on the big speakers, and they can always see how my mix is progressing. If it’s not so great, they can tell me, and vice versa! The fact you can run all this kit at the same time means there is no limit to what this can do, especially if you have even more rooms, with more people collaborating.”

A current day in the life of Pompetzki and crew is pretty eclectic, though one thing is constant: DiGiGrid is used on everything.

“We’re crazy busy with film scores and TV commercials, and we just did the new album by Sido, Germany’s biggest rapper; I’ve also mixed two tracks for A-Ha, and we’re working with our own artist Phela who’s signed to Sony Columbia in Germany, so you could say there’s a lot going on,” Pompetzki explains. “IOX and DLS are being used on absolutely everything. I really like mixing in Pro Tools, but if I feel a little limited by its MIDI capabilities, I do like running Logic on the same machine or on other machines. I use the DLS all the time for running plugins that aren’t available at AAX, and for sequencing while I am mixing. DLS gets switched on in the morning, runs beautifully, and never crashes! As for IOX, that gets constantly used as an audio interface for the B room setup; it’s the main audio interface for that room, be it for extra inputs or to record our analog synths, which we have a bunch of in the B room. So whenever I want to record these, I just route them in via the little IOX.