Antonio Luna Is Over the Moon with His DiGiGrid MGB 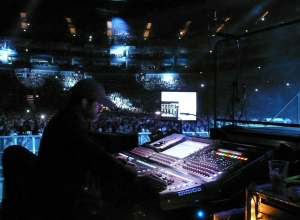 Antonio Luna is a DiGiCo SD10 digital mixing console owner and monitor engineer for Alicia Keys and American rock band Alter Bridge. Early last year he got word of a product that he knew was going to be very useful to him – the neat little DiGiGrid MGB interface that lets you plug any coaxial MADI-enabled device into the power of the Waves SoundGrid networking and processing platform.

“I’d wanted to buy a recording rig for some time as virtual soundchecks are really useful for a monitor engineer, but the cost of the gear to do that had always been prohibitive,” says Antonio. “The DiGiGrid MGB is a solution that means you just need one black box and a laptop to capture and playback audio on your console at a cost that’s really affordable. This black box was going to allow me to record up to 128 tracks of audio from my SD10 at 48k and 64 tracks at 96k.”

Fast-forward to November 2013 and Antonio got a call to say he was going to be one of the first people to get an MGB. A few days later it arrived.

“Everything about the DiGiGrid MGB is great,” he smiles. “From the packaging – it’s surrounded by non-compressible foam, which is important for me as I travel a lot – to the fact that it has 6ft of Ethernet cable and a universal DC power wall wart style PSU that has a world plug adapter set and a threaded rotating collar. The little things go a long way and losing power to a pulled plug is something you don’t want to worry about.”

Within a couple of hours, Antonio had updated his MacBook Pro and installed the software he needed.

“As chance would have it, our tour needed to solve some problems,” he recalls. “We were on the last leg and it was a big one: 22 flights in five weeks that would take us to 17 cities in the Middle East, Japan, Southeast Asia, Australia and New Zealand. We recorded all our shows and part of our spec is a Pro Tools rig at FOH to archive. The local provider couldn’t get a recording rig for FOH for one of the shows, so DiGiGrid got its first workout.”

As luck would have it, Antonio was able to fit his SD10 console, SD-Rack, RF rack and cables onto a single airfreight pallet that was shipping with the artist’s grand piano and backline.

“This meant we could use DiGiGrid and my laptop as the recording rig for the show,” he continues. “Both DiGiCo and the Reaper software I’d bought have a matrix patch bay, so you can determine what channels in the signal path you want routed to specific SoundGrid channels. This allowed me to pick up just the channels I wanted, leaving channels like talkback mics behind.”

The show went without a hitch and Antonio had set up the Performance Meter in Reaper to evaluate the performance of the laptop.

“I was impressed,” he says. “Total CPU usage was just 22% max and the file size for 54 inputs was just under 100Gb, which meant I could safely record two shows on my machine before moving them to storage. And you’re not limited to using just one DiGiGrid device. If you have more than one rack, you can use a second DiGiGrid unit to get higher track counts; a generic switch will allow you to connect two DiGiGrid interfaces to your DAW.

DiGiGrid’s integration with my console was seamless. And it isn’t just for DiGiCo users: any console with a MADI connection can use DiGiGrid devices to record.

“Thank you Matt Larson at Group One Ltd

[DiGiGo’s US distributor] for keeping me in the loop on new developments. The ability to record using DiGiGrid is simply amazing.”