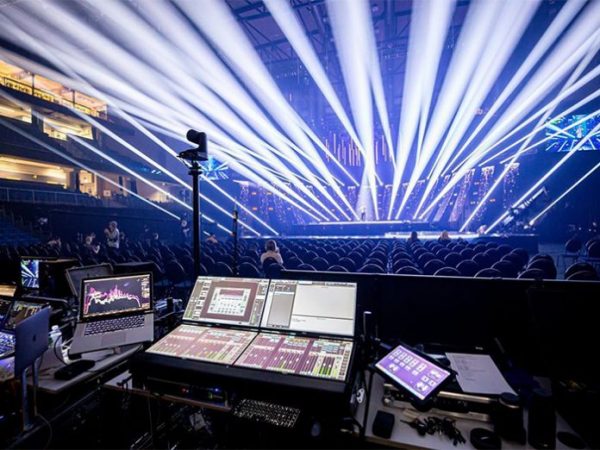 DiGiGrid’s Estonian distributor Sinusoid was part of the technical team for Eurovision, with Managing Director Kristo Kotkas responsible for front of house sound and Otto-Karl Vendt taking care of monitors. Both jobs were carried out using Waves LV1, with a DiGiGrid D desktop interface at the monitor position for listen-back and a DiGiGrid IOC interface at front of house for local I/O.

An experienced engineer, Kristo mixes around a hundred shows a year and is a big fan of the sound and build quality of DiGiGrid units. As a Waves reseller for a number of years, the introduction of a live mixing system prompted a serious look at what DiGiGrid had to offer, leading to Sinusoid eventually becoming DiGiGrid dealers for the region.

Kristo commented: “For my own part, when I switched to LV1 systems, I started using a DiGiGrid D as my FOH I/O box – this little box served me for over two years before being recently replaced by IOC. Lots of my customers also use DiGiGrid interfaces and it’s also worth noting that we have radio stations running on LV1 systems with DiGiGrid interfaces.”

He explained: “When you start looking into Waves SoundGrid interfaces, you quickly realise that there is no other manufacturer who makes I/O devices with a small footprint like DiGiGrid does, so that’s why we see either DiGiGrid D, M, IOX or IOC modules used for local I/O wherever there is an LV1 in sight. There’s really no competition in this area – you reach out and get hold of a DiGiGrid device!”

Reflecting on the Eurovision shows, Kristo was pleased with how everything went: “We were well prepared and the production schedule wasn’t too tight, so we had enough time to make sure the rehearsals and shows went to plan. We used LV1 systems on both monitor and FOH positions and used as many scenes as we needed to present a smooth sounding show for both the audience in the hall and the performers on the stage, even if that meant changing scenes numerous times within a song.”

Service and build quality underpin the increasing popularity of DiGiGrid unit concludes the Sinusoid boss: “Communication with the DiGiGrid team and order management is quick and very professional. I don’t think I’ve had a single complaint from any of our customers. Out of interest, I always keep an eye on the second-hand market in pro-audio gear and to be honest, I don’t ever see DiGiGrid equipment up for sale – I think that speaks volumes about what people think about their investment in the brand.”

Although this year’s Eurovision Song Contest will not take place, the European Broadcasting Union is currently exploring ways of using alternative programming and online platforms to entertain the public in challenging times, by honouring the songs and artists who were chosen to represent their countries in 2020. Estonia’s Uku Suviste will be one of those who will help to ensure that, in some way at least, the show will go on.

DiGiGrid Brand Manager Dan Page summed up: “The show was a great success and we’re delighted have played a small part in Kristo’s expert handling of this challenging event. As the live events market suffers the difficult consequences of the COVID-19 pandemic, we are resolved to keep a firm focus on the important part our industry plays in the enrichment of people’s lives. We look forward to a time when live events can safely be resumed, and when our friends and global partners can return to deploying their extensive creative skills across a thriving entertainments sector.”