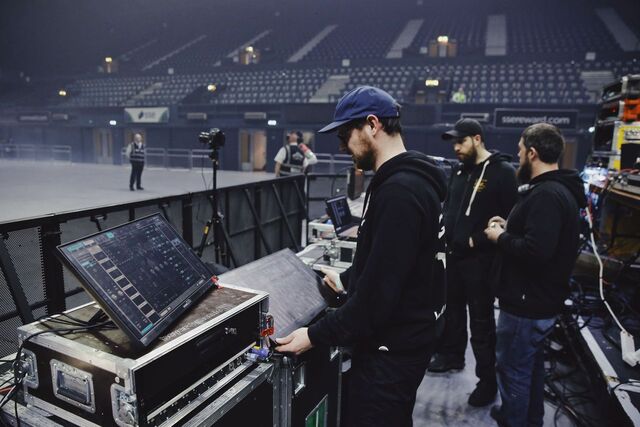 As a highly respected touring front of house engineer, Tim Southorn’s day job (his description), has seen him work with a fascinating list of artists, primarily in the rap and pop genres. Tim’s day job however is only part of a wider palette of audio work that sees him involved in broadcasting and studio mixing. Whether it’s a live concert mix, an album, a commercial, a film score or live stream, he applies a depth of critical listening that established itself in his psyche from his earliest days. His most recent work has been with artists like Giggs, Jack Peñate, Samm Henshaw and Yellow Days – and Tim was on the road with Gabrielle Aplin when her tour was cut short by the COVID-19 outbreak – but he cut his audio teeth as very young man, mixing three hundred shows a year, up and down the UK on the tribute-band circuit. That apprenticeship, often conducted in very challenging circumstances, ingrained a work ethic that survives to this day. His trade well and truly learned at the sharp end, he is now to be found working for clients such as Sony Music, Universal Music, MTV, Apple and many more besides.

Always seeking ways to achieve better results for the artists he works with, Tim first read about DiGiGrid when his interest was piqued by the Waves LV1. With a workflow centred around plugins, the LV1 seemed like a natural evolution but it was DiGiGrid’s IOS unit that came first, as he explains:

“The DiGiGrid IOS was a no-brainer. As soon as I read the specs I bought one sight-unseen, since on paper it replaced, with a 2U flyable rack, so much of the equipment I was carrying around. I slowly introduced it into my daily workflow and then took the plunge and last year moved to a complete Waves/DiGiGrid system.”

Tim uses the DiGiGrid’s modularity and flexibility to suit the requirements of whatever project he’s working on at a given time:

“The flexibility and scalability combined with impeccable sound are key. I flatly refuse to compromise on quality, but I no longer have to carry around excessively large systems to ensure that I maintain the highest possible standards.”

To illustrate the point, Tim describes back-to-back tours with different artists. One began with a series of underplays at the tiny St Moritz club in Soho and the second one ended at Wembley Arena:

“At the start, I was pulling the system together to try it out – I ended up doing the first couple of shows with the IOS, my laptop and a little midi controller. As the tours progressed, I added in a redundant server, extra IO, redundant recording rigs and extra touch screens (when I had lots of guest mics I wanted to keep an overview of) but in reality it was still the same console,

I still worked in the same way and obtained the same high quality results.

“The way I see it, the impressive thing is not the scaling up as I did, but the reverse scenario – that I’m able to take the same tools and provide the same quality of production to the artist whether we’re playing in a huge arena or a tiny club. Space and budget are no reason to compromise for me anymore. On these occasions, the scale and composition of these gigs were poles apart but to be honest, the only difference was the size of the PA – my workflow never changed. I’d also add that the build quality of the units is excellent – very robust and reliable.”

On the recently curtailed Gabrielle Aplin tour, now rescheduled for later in the year, Tim had a DiGiCo SD11 on stage, sharing an SD Rack with his LV1 setup at front of house via a DiGiGrid MGB coaxial MADI interface. At front of house he used a Waves Extreme Server C with his DiGiGrid IOS as local I/O and redundant server. The IOS went via AES to an XTA MX36 switching system and then to the house system controller. Tim also used a DiGiGrid Q desktop interface for monitoring at front of house – something he’s currently using as his main headphone amp in the studio. At this moment, whilst he describes the Q as “fantastic” he’s considering replacing it with the more feature-rich DiGiGrid D, demonstrating once again that relentless desire to seek out yet more creative advantage.

For a touring engineer, access to good service and support is essential and Tim has no complaints where DiGiGrid is concerned:

“They’ve been fantastic. I met Dan Page at NAMM at the beginning of the year and since then his insight and depth of knowledge has been invaluable. He understood my ethos from the outset, and has fielded many an annoying query from myself! I feel valued as a user and that inspires confidence in carrying the products, as I know I can pick up the phone if I ever need help.”

As is currently the case for all touring engineers, Tim is locked-down and contemplating the likely landscape of the live industry in the coming weeks and months. In the meantime he’s occupied with audio projects at home, including remote mixing and preparing designs for tours due to roll out later in the year. Whatever the future brings, it is certain that this most meticulous of audiophiles will tirelessly continue his ever-evolving mission to support the work of his clients with the best possible sound.